I am a Middle Eastern cigarette smuggler 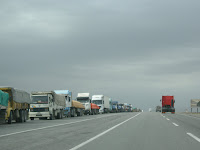 At the Iraq-Turkey border - Saturday, Oct. 25

I left Iraq this morning, crossing into Turkey via the busy Ibrahim Khalil crossing that is landlocked Iraqi Kurdistan's main lifeline to the outside world (see lineup of trucks at left).

I left Zakho, a dusty border town, and ascended into the jagged mountains of southeastern Anatolia in a Turkish taxi, a white Ford Focus driven by a gruff man named Kemal. It would cost me $150, he said, for the four-plus hour drive between the predominantly from Zakho to Diyarbakir in Turkey.

With his bald skull, and shiny black shirt tucked into shiny grey slacks, Kemal looked like an extra on some Turkish version of the Sopranos. Not Paulie or Silvio, mind you, but one of those anonymous thugs they sent out to rough up the guys who inadvertently picked up the trash on one of Tony's routes.

That's just me stereotyping of course. Or at least it was until Kemal pulled me aside at the border crossing and showed me a black garbage bag stuffed with several cartons of Gauloises cigarettes.

"For you," he told me with a please-understand-this-or-we're-both-in-trouble look in his eyes. "Not for driver."

I got the message. If anyone asked, I smoke six packs a day (despite my asthma) and came to Iraq for the cut-rate ciggies. Got it.

Thankfully, the question never came up, and Kemal, the Gauloises and I glided through to the land of Ataturk. A Kurdish guard on the Iraqi side, however, did have some queries about my passport.

"Like Montana?" (For some reason, it's the U.S. state best known in these parts.)

"Like Kurdistan and Iraq?" (This gave me pause. Perhaps we are indeed only semi-autonomous in the Stephen Harper era. But my patriotism was by now in full roar.)

The guard furrowed his brow. Canada being an entirely separate entity didn't quite sound right to him, but he obviously he didn't want to insult me either. He offered a compromise.

"Maybe like Kuwait?" he said, referring to the tiny Gulf state that Saddam Hussein always claimed was a renegade Iraqi province.

I took the offered olive branch. After all, the world had driven Saddam out of Kuwait when he invaded back in 1991. Not a bad precedent to establish for that inevitable day the Americans come seeking revenge for the War of 1812 and Celine Dion.