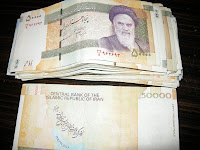 As of today, I am an Iranian multimillionaire.

At dusk – nearly everything closes during the afternoon because of the 40C heat – I plunged into the thick and sweaty crowd at a currency exchange office inside one of Kish’s myriad duty-free shopping malls (which sell mostly cheap Chinese-made electronics and what appear to be knock-offs of Western-brand clothing) and emerged with an armful of Iranian rials.

Three hundred US dollars bought me nearly three million Iranian rials, most of them in crisp orange 50,000-rial notes. For those of you who like to view things from a geopolitical standpoint, it seems three Benjamin Franklins are worth a giant pile of Ayatollah Khomeinis.

After years of travelling through the Middle East with almost exclusively US currency in my wallet, I finally found a place that wouldn’t accept the greenback when I went to go pay the fee for my mainland Iranian visa today. The Ministry of Foreign Affairs of the Islamic Republic of Iran, it seems, is unwilling to accept the Great Satan’s money, a currency even Saddam Hussein and Robert Mugabe had no trouble filling their coffers with.

An apologetic teller at the bank informed me that the payment could only be made in Euros or Iranian rials. Dropping his voice, he then proceeded to warn me that even though America was in financial crisis, I shouldn’t change too much of my dollars into Iranian money. “When you get to Tehran, people on the streets will take dollars, no problem,” he said conspiratorially. “Thank God for the US dollar.”
Posted by markmac at 6:43 p.m.