Next year in Tehran? 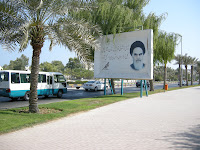 Over the years, I have been turned down on three separate occasions when I applied for a visa to visit Iran. The first two attempts were via the Iranian Embassy in my old home of Moscow, and once I was even approved for a journalist visa by the Foreign Ministry in Tehran only to have it revoked when I went to pick it up at the Tsarist-era building that housed the embassy on Moscow’s tree-lined Pokrovsky Boulevard.

With over-the-top ceremony and politeness, the ambassador treated me to half-a-dozen cups of tea and a plate of cookies as he rolled out a lengthy explanation of why I wouldn’t be allowed to board my flight to Tehran the next morning. “Iran loves Canada,” he told me earnestly. “But Canada does not love Iran.” I had no retort. After that much tea, all I could think of was my bladder and what level of diplomatic faux-pas it would be to relieve myself in the snowbank outside the embassy.
The ambassador didn’t say it out loud, but he didn’t need to. The visa had been revoked because of the diplomatic brouhaha over Zahra Kazemi, the Iranian-Canadian photojournalist who was raped, tortured and beaten to death in 2003 inside Evin Prison, in northern Tehran. No Canadian journalist, the Iranian authorities correctly surmised, could travel to the country without making an effort to investigate what had happened to Ms. Kazemi.

During the nearly four years I lived in Jerusalem, an Iranian visa was an effective impossibility. In fact, you're forbidden from travelling to the Islamic Republic if you've even set foot inside Israel/the Zionist Entity. Though there were a few intrepid correspondents who did the occasional Jerusalem-Tehran commute, they were generally old Iran hands who had contacts inside the regime in Tehran who could be trusted to look the other way when their visa applications arrived. So when I finally convinced my editor to let me drive across the Middle East to mark the end of the Bush era, I knew that the biggest hurdle would actually be in reaching the starting point of my journey.

There were two routes I could try. First I sent in an application for a tourist visa via an online service that promised Iranian visas “in 7 easy steps.” I was so enticed that I didn’t notice the chart on the same webpage which suggested Canadians are more likely to be turned down for Iranian visas than any other nationality, including Americans. I gamely sent in the 72-euro application fee, only to get the predictably negative reply a few weeks later.

So Kish Island represented a last, desperate chance to see Iran before I ended my tour of duty in the Middle East. And today, I was told – again – that I was not welcome in the Islamic Republic. “There is a problem with your visa,” the shy desk clerk at the Ministry of Foreign Affairs office told me. The office is one of the few places on the island where photographs of Ayatollah Khomeini and his successor Ayatollah Ali Khameini are displayed.

After a week of battling with the bureaucrats and being repeatedly promised a visa, I was as grumpy as the two ayatollahs looked in their official portraits. I demanded to know what the "problem" with my visa was. I got a one word answer: "Politics."
Posted by markmac at 6:54 p.m.